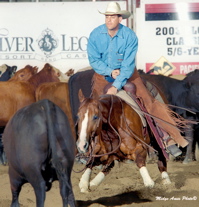 Cattle feeding margins declined $17 per head last week as cash sales dropped another $1 per hundredweight, according to the Sterling Beef Profit Tracker. Beef packers saw their margins improve $20 per head, leaving losses at $14.52 per head. The Sterling Beef Profit Quotient declined 47 points for the week and the industry profitability index […]
READ MORE

READ MORE
A Missouri state representative claims animal abuse laws are inaccurate and has proposed a bill to change the law regarding crimes of animal neglect and animal abuse. The legislation, HB 564, separates animal abuse or neglect from a new provision defining “animal trespass.” A release from the Missouri Cattlemen’s Association says the legislation differentiates between […]
READ MORE
The Sulpher Livestock Auction is holding the Steve Pickett Estate Sale on Monday, March 18, at 3:00 p.m. in Sulphur, Oklahoma. Equipment sells first, followed by approximately 400 horses including the stallion Bay Starlite, whose foals have earned more than $70,000 in NCHA, NRCHA and NRHA competition and have more than 350 AQHA points to […]
READ MORE
Reiners heading to the National Reining Breeders Classic (NRBC) need to be aware of the EHV-1 Biosecurity Protocols that will be in place during the show. Horses showing at the NRBC will need to have a health certificate drawn within seven days of the show, as well as a temperature chart. Read the complete NRBC […]
READ MORE

The Great Southwest Equestrian Center in coordination with the Texas Animal Health Commission, Currie Equine, and the show management for Great Southwest Spring Roundup, Pin Oak Charity Horse Show, Spring Gathering Charity Horse Show and the National Reining Breeders Classic would like to announce the Health Protocols to be used during these shows:

For the past couple of years, my full-time job has been in the Quarter Horse racing industry. To be a magazine editor, you have to immerse yourself in the industry on which you are reporting, getting down to the nitty gritty. During those years, my role in the Western performance horse industry was relegated to that of casual observer, rather than active participant.

That all changed when I came to Quarter Horse News. My interest in Quarter Horse racing now takes a backseat to the Western disciplines of cutting, reining and reined cow horse. My primary goal over the past month has been to bone up on what has taken place in the last few years with regards to those industries.