Lee and Holly FrancoisThe Southern Cutting Futurity descended on Jackson, Miss., Oct. 21-27, bringing some of the sport's greatest limited-age horses out to compete. As the dust settled on the Futurity Open finals Thursday, Oct. 24, Elseware and trainer Lee Francois were sitting at the top of the scoreboard.

Equine Guelph's fecal collection videoEquine Guelph has launched a new 2 ½-minute video to help horse owners with parasite management. When a growing resistance to dewormers is cited as a major issue concerning horse owners today, a fecal exam to see if your parasite control program is working makes sense. Collecting a manure sample is easy, but it must be done properly to ensure accurate test results. 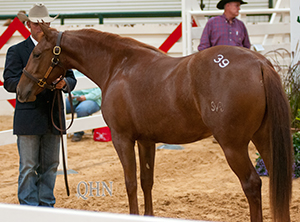 This yearling filly is out of Smart Look Classic, a clone of The Smart Look. Photo by Stacy PigottOn Oct. 14, the American Quarter Horse Association (AQHA) filed a stay request with the Northern District of Texas United States District Court in Amarillo, Texas. The stay request asks the court to delay enforcing an Aug. 22 court order requiring the association to begin registering clones until an ongoing appeal is completed.

Well, for starters, it just looks bad. Secondly, there is a normal tooth misplaced, a terribly diseased tooth hanging on for dear life and another gone altogether. If pictures could smell, this one would. The black tooth smelled as bad as it looked.

For the past couple of days, the reining industry has been abuzz with allegations of horse abuse at a ranch in Southern California. A 5-year-old mare is dead and a trainer is being accused of causing her death. Local animal control officers were called and, as I write this, an investigation is underway.

I don’t know if the trainer in question is guilty of horse abuse or not. A necropsy is being done and, when the animal control investigation is concluded, the final report should shed some light on a situation that is surrounded by rumors and heresay.

READ MORE
The severe, unexpected blizzard that hit Western parts of South Dakota Oct. 4-5 left thousands of dead cattle in its wake, with early death estimates totaling 60,000 and higher. However, state veterinarian Dustin Oedekoven has estimated the numbers will more likely be around 20,000.   Drovers Cattle Network has the full story.
READ MORE