Elvis (upper left) in 1975, dressed in Denver police captain's attire to camouflage him when they took him to dinner. Pictured with Elvis are Captain Jerry Kennedy (top right), Bob Cantwell (lower left) and Detective Ron Pietrafeso (lower right). • Courtesy of Ron PietrafesoBefore Ron Pietrafeso hit the open road with his family – wife Adrienne and daughters Nicole, Jessica and Gianna – on the weekend cutting circuit, he used to roll with the King himself. Pietrafeso, then a Denver police officer, met Elvis Presley while working an extra security gig in Colorado. The Colorado cop and the singer from Tupelo, Mississippi, quickly became friends.

Families across the nation are invited to meet a horse on Saturday, July 25, at participating Time to Ride Challenge host locations. Stables, camps, clubs and businesses are opening their doors for National Meet-a-Horse Day to help new equine enthusiasts make a connection with a horse.

Treatment options for the performance horse will be reviewed. • Photo by Kelsey PecsekEquine veterinarians will unravel the mysteries behind impaired performance in the athletic horse when the American Association of Equine Practitioners’(AAEP) Focus on Poor Performance meeting convenes in Lexington, Kentucky, Sept. 10-12.

Pedel To The Metall & Adan BanuelosAt the Western Bloodstock/National Cutting Horse Association (NCHA) Showdown in Cowtown Open finals, held Sunday, July 12, in Fort Worth, Texas, Pedel To The Metall laid the hammer down to win the inaugural event, which attracted high-caliber horses. 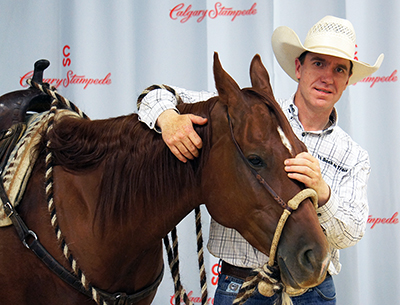 During the two-day event, Swales won one championship – the Open Hackamore – showed three out of the five Open Bridle finalists (back-to-back), coached three of his clients to championship titles in the Open Bridle, Limited Open Bridle and Novice Non-Pro Bridle, and helped and encouraged many of his fellow competitors.

Open Champions One Time Choice and Chubby TurnerCutting enthusiasts attending the Mercuria/National Cutting Horse Association (NCHA) World Series Open and Non-Pro finals on Wednesday, July 8, got their money’s worth and more for the Calgary Stampede tickets they purchased. The world-class competitors put on a show that was impressive and unforgettable.

Junie Wood & John Mitchell • Hart PhotosThe draw sheet for the inaugural Western Bloodstock National Cutting Horse Association (NCHA) Showdown in Cowtown Slot Cutting reads like a Who’s Who in the cutting horse industry. The line-up for the first-go of the Open, to be held July 9 at the Silverado Arena in Weatherford, Texas, includes two Horses of the Year, as well as four NCHA Futurity champions and numerous aged event winners.

See More of the Bar VH