GR JFB Boy and Dominik Reminder • Photo By Art & LightFor many years, the Americana has been one of the most important shows for European reiners. In 1988, the Americana offered its first Bronze Trophy, and since then, the purse has helped decide the National Reining Horse Association (NRHA) World Championship. 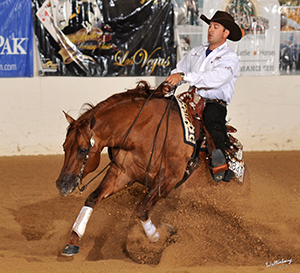 Snip O Lution & Martin Larcombe Martin Larcombe drew up early in the Southwest Reining Horse Association (SWRHA) John Deere Futurity Open Finals on October 25. He was the third out and when his run was completed, a new standard had been set. He piloted Snip O Lution (Einsteins Revolution X Snip O Chex) to a smoking 224.5 score that would hold up through all the rest of the challengers.

Xtra Electric Meter & Craig Schmersal • Photo by Shane RuxOn Sunday, Oct. 5, a new Futurity Open Champion was named at the All American Quarter Horse Congress in Columbus, Ohio. As the National Reining Horse Association (NRHA) Futurity Level 4 Open finals came to a close, it was Xtra Electric Meter and Craig Schmersal, of Overbrook, Okla., who secured the championship with their score of 229 to win $31,378.

Not Ruf At All and Jason Vanlandingham • QHN photo by Stacy PigottThe High Roller Reining Classic concluded on Sept. 20 with a large and contentious group of horses in the Lucas Oil Derby Open and Whizkey N Diamonds Stakes Open. When it was all said and done, Not Ruf At All and Jason Vanlandingham added two more major titles and substantial earnings to their records.

Left to right: Mandy McCutcheon, Shawn Flarida and Andrea Fappani - Photo by Andrea BonagaGreat horses, great riders, great horsemanship and an enthusiastic public are what made the Individual Reining Final Competition amazing at the Alltech FEI World Equestrian Games 2014 in Normandy. Last to enter the arena, which counted some of the world’s best horses and riders, was National Reining Horse Association (NRHA) $5 Million Dollar Rider Shawn Flarida. Aboard Michell Anne Kimball’s Spooks Gotta Whiz, Shawn had posted the highest score – a 229.5 – in the individual qualifier, which put him last to go in the seeded finals.

Eduardo Salgado and his son aboard Meradas ShiningThe Tulsa Reining Classic, held Aug. 26-31, at the Expo Square in Tulsa, Okla. had competitors coming from near and far for a chance to win top honors. There were 94 horse-and-rider teams striving to earn the championship in the Hollywoodstinseltown Futurity Open, but draw 50, Meradas Shining and Eduardo Salgado, set the bar highest at 221.5 and took home the title.

Team USA: (left to right) Jordan Larson, Mandy McCutcheon, Andrea Fappani & Shawn Flarida • Photo by Andrea BonagaThe Alltech Fédération Equestre Internationale (FEI) World Equestrian Games (WEG) kicked off on Aug. 23 in Normandy, France. Team USA showed up ready to give it their all in the reining, and took the gold medal in the Team Competition for the fourth-consecutive year.
READ MORE