Skip to content
Quarter Horse News > Blogs > Industry Insider With SDP > Stallion Management: The Who, What & Why

Hi! My name is Shane Plummer. What was that you asked? What do I do for a living? Well, friend, I sell sperm. The highest quality around. International sperm sales is my trade. White gold we call it! This bit always goes over well at my kid’s schools or at church. I can beat the tar out of the other dads on career day.

Each passing year, I hope to refine my trade of choice. Improvement and striving for excellence is my great motivator. Over the past 10 years, SDP Buffalo Ranch has made a concerted shift in our focus to being the premier stallion station with international distribution. I am immensely proud of who we are and our amazing team here, as we strive for excellence in all that we do. We take our customers’ success seriously; it is truly the only way we can succeed.

So far, our 2018 stallion roster is shaping up to be the VERY BEST we’ve ever had! We are thrilled and so grateful for our wonderful stallion owners. I am consistently asked the why behind the stallions we stand, and I thought it was important to share that with y’all. Some things just don’t and can’t show up in an ad. This venue allows for me to explain some things, and it will also serve as a great reference for breeders.

So, in alphabetical order, here is our current 2018 stallion roster. I know this is a long “blog,” but it is one that I hope mare owners can really sink their teeth into. 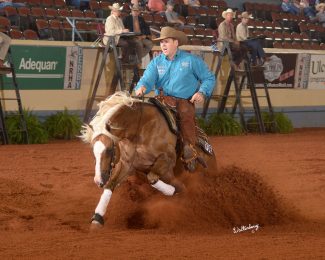 Big Star has been crowned champion in four major Open limited-age events through his career, most recently marking a 231 at the High Roller Reining Classic in Las Vegas last month. He is a freakishly good athlete, and of pure heart and mind to stay consistent through the years.

Big Star has been masterfully trained and shown by one of the best in the industry – Hall of Fame trainer and $2 million rider Jordan Larson. The plan with Big Star is to show him in the American Quarter Horse Association (AQHA) World Show next month, which is very exciting, and then he’ll come here to SDP to prepare for the upcoming breeding season. In 2018 after the breeding season, he will be taken back to Jordan to qualify for the Federation Equestre Internationale World Equestrian Games to take place in North Carolina! Very exciting!

Big Star is proudly owned by HDC Quarter Horses, who has been competing at the top of the reining industry for years both as owners and breeders. HDC knows what they are doing, and their trust in us makes me very proud. HDC is represented by Hubert and Cara Huele. We here at SDP have enjoyed working with them and planning an extremely bright future for this superstar.

I could go on and on about Big Star. I spent a day with him at Jordan’s last month and was impressed with him from the get go. Some horses just know they are special; Big Star is one of those horses. He’s won nearly $290,000 now. Again, who he is and what he is speaks louder than anything I can say. His oldest foals are yearlings in 2017. His primary focus has been as a show horse these past three years and 2018 will be his like his premier year at stud.

I had been following this stallion over a three-year period before I was able to put a group of investors together to buy this amazing stallion. He was trained by Hall of Fame trainer Beau Galyean, one of the best in the business, from his late 3-year-old year through his aged-event years. From 4 to 6, Cattalou was a finalist in 27 major Open limited-age events. During that time, he was champion or reserve six times! The stallion guy and pedigree nut that I am, I lusted after this horse all that time. When the opportunity opened up to get him, I did all that I could.

When we got him here, I felt fortunate to have cutting’s No. 5 all-time leading rider and Hall of Fame cutting trainer Paul Hansma, who trains out of my facility. Paul tried Cattalou and after just one cow, got off and said he’d like to show him in upcoming Open weekend events.

For an aged event trainer like Paul to want to take the extra time to cut in weekend events on a consistent basis really shows what he felt about this great horse. Julie Hansma, Paul’s wife/partner/and I’ll add, greatest asset told me that she’s never seen Paul, “so excited to show a horse.” That was January 2016, and he started his first year at stud that very next month. We got through the breeding season and showed him as much as we could, then we formulated a plan to haul him for the National Cutting Horse Association (NCHA) Open World title in 2017.

Before the 2016 NCHA Futurity, I had been in contact with my good friend Mr. Billy Morris, of Creek Plantation, and his plan to get more involved at the top end of the cutting horse industry. A number of stallions and mares were discussed in great detail. Over a couple months, Cattalou was one stallion that caught Mr. Morris’ attention, and he was excited to hear that we’d selected Cullen Chartier to haul Cattalou in 2017, as Mr. Morris has had a relationship with the Chartier family for more than 30 years.

Creek Plantation purchased Cattalou and has supported him in the very best ways possible through promotion, hauling him for the World and breeding him to elite mares within the industry. Cattalou and Cullen, at tje time of this writing, are sitting third in the Open World standings and are the leading stallion. Cattalou’s lifetime earnigns are nearing the $300,000 mark, and it will be an extremely exciting NCHA World Finals at the Futurity this year.

With his first foal crop born in 2017, I have found that his foals are a dream. My father’s opinion of horseflesh is as good as anyone’s. Regarding Cattalou, he said, “If you find a better-looking stallion, you should breed to him.” I personally think Cattalou is a flawless individual.

2018 will be his third year at stud. We have said that Cattalou is a FREAK, and I mean that in the very best way imaginable!