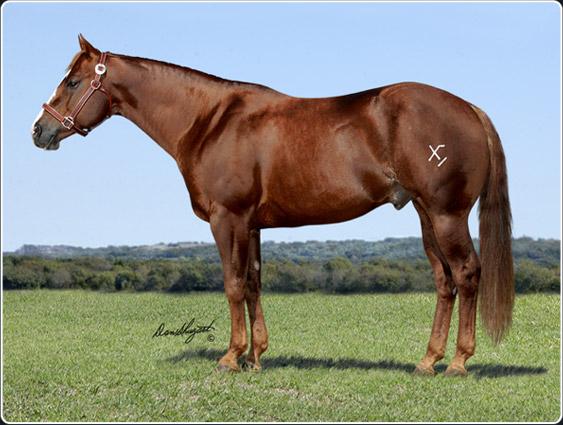 Known to many in the performance horse industry by his nickname, “Boss,” CD Lights was foaled in 1999. He is owned by his breeder, Danny Motes, and leading National Cutting Horse Association (NCHA) professional Winston Hansma, of Weatherford, Texas.

Trained and shown by Hansma, CD Lights earned $233,382 in five seasons of NCHA competition. He became an Open finalist at 14 major NCHA limited-age events, including the 2002 NCHA Futurity and 2003 NCHA Summer Spectacular Derby. Another career accolade for CD Lights was marking a 229 in the third go-round of the 2006 NCHA World Finals to win the Open World Finals Championship, after which the stallion was retired from showing.

CD Lights sired a single foal in 2004. His 2005 foals, as 3-year-olds, proved they had inherited their sire’s superior physical ability and disposition by earning substantial paychecks in the 2008 futurities. CD Lights’ babies made their earliest impression in the NCHA show pen, but quickly crossed over to also assert themselves in the demanding triathlon of reined cow horse competition.

Hansma has continued his role in CD Lights’ career by training and showing his offspring to major titles in both cutting and reined cow horse, winning the 2013 NRCHA Snaffle Bit Futurity Limited Open Championship on Bossy Brother (out of Diamonds Sparklette x Genuine Doc), a gelding he owns with Motes.

In official recognition of CD Lights’ Million Dollar Sire achievement, he will be honored during a special presentation at the 2017 NRCHA Snaffle Bit Futurity in Fort Worth, Texas.