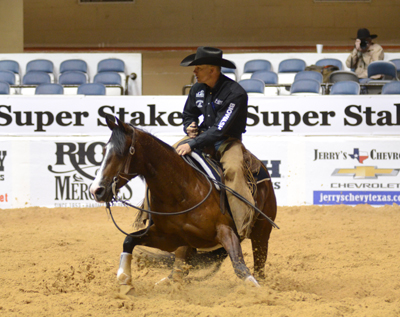 Upton, who has been showing in the Open since 2011 and has lifetime earnings of $181,724, said winning his first limited title felt really good.

“He’s been pretty special to me,” the Weatherford, Texas-based horseman said of Superfly. “I’m just pleased I could get him a title. He deserves one.”

Upton said his game plan going into the finals was to pick cows that would challenge the Georgia and Dave Husby-bred gelding in a way he could handle.

“Right when we were done, I was very proud of him,” he said. “Nothing he did tonight was a shock to me. I’m just pleased that I could present him the way I should be presenting him.”

After taking home the winner’s check of $4,122 to owners Brett and Shaye Johnson, Superfly boasts a bankroll of $25,576. The son of Smooth As A Cat is out of the Holidoc mare Lenas Horn, who has produced 11 money-earners that have collected $529,004.

Wild Starz and Jose Cruz’s 216 took the Reserve Championship, which came with a $3,585 paycheck. The mare (Wilds My Thing x MH Milliondollaride x Bodee Boonsmal) is owned by Nachos Quarter Horses LLC and was bred by Bobby and Francie Butler.

For complete coverage of the NCHA Super Stakes, subscribe to Quarter Horse News.