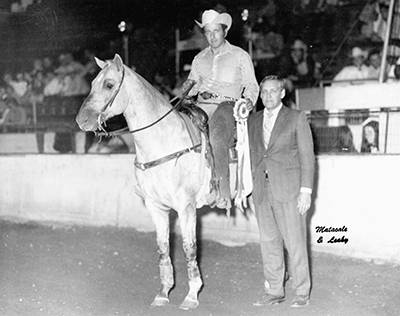 Hollywood Jac 86 and Richard Greenberg • Photo by Metacale & LeahyHollywood Jac 86, an average-sized, floppy-eared palomino stallion, is not remembered as one of the reining industry’s best-looking athletes. However, his natural, deep sliding stops made him a legend.

His combined athleticism, intelligence and quiet disposition gave the stallion, pictured with non-pro rider Richard Greenberg, an advantage in the show pen. Greenberg, who labeled the stallion his “Rock of Gibraltar” because of the horse’s consistency in the arena, rode Hollywood Jac 86 (Easter King x Miss Hollywood x Hollywood Gold) to two National Reining Horse Association (NRHA) Non-Pro World Championships in 1974 and 1975, before retiring the horse with NRHA earnings of $6,089.

Hollywood Jac 86 was the first NRHA Million Dollar Sire. His son, Hollywood Dun It, reached NRHA Six Million Dollar Sire status. Today, 26 years following his death in 1991 at the age of 25, Hollywood Jac 86’s influence is still felt within the industry. He is ranked 20th on the Equi-Stat Annual Reining Statistics Paternal Grandsires chart with 2016 earnings of $119,081. He is ranked 11th on the Maternal Grandsires chart, with $195,933 in earnings last year.

Sons of Hollywood Jac 86 have sired 2,594 performers that have lifetime earnings of $15 million, while his daughters have produced 495 money-earners with total earnings of $4 million.