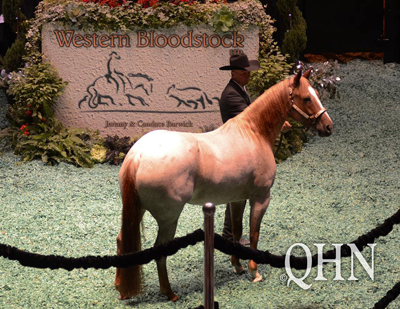 Swiss Cat Pepto was the highest seller at $80,000 • Photo by Alex LynchWith nearly 180 head of mixed stock making trips through the sale pen during Session I of the Western Bloodstock Preferred Breeders Sale at the National Cutting Horse Association (NCHA) Futurity, the variety of horses filled the stands with prospective buyers.

The sale included a Special Cow Horse Session, but it was Swiss Cat Pepto, a 2009 red roan mare by Sweet Lil Pepto and out of Swiss Cat, by High Brow Cat, who commanded the most attention. The mare, consigned by Jeff and Margaret McCoy, sold with an embryo by Sannman, and the two-in-one package brought the day’s highest bid of $80,000.

Swiss Cat Pepto earned $165,905 in her cutting career under the training of Equi-Stat Elite $4 Million Rider Clint Allen, and produced her first foal, Lezmarvinreyngetiton (by Dual Rey), in 2015. Swiss Cat Pepto is a half-sister to Little Swiss Desire (by Desires Little Rex), who boasts lifetime earnings of $56,315. 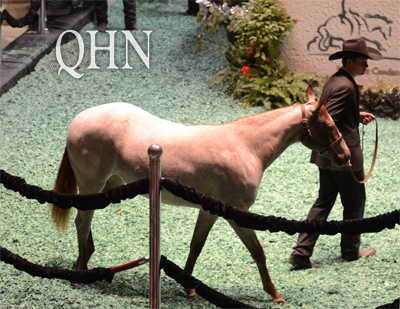 The hammer also fell at $39,000 for Smoothasababysbottom • Photo by Alex Lynch

Dustin and Deena Adams consigned Smoothasababysbottom, a red roan yearling filly by 2005 NCHA Horse of the Year Smooth As A Cat. Her dam is the Peptoboonsmal mare Boonsmal Doctress, who has more than $550,000 in offspring earnings. Smoothasababysbottom is a half-sister to The Doctress Orders ($153,623, by Dual Rey), The Big Bucks ($147,905, by Smart Sugar Badger), Our Special Kitten ($142,269, by High Brow Cat) and others.