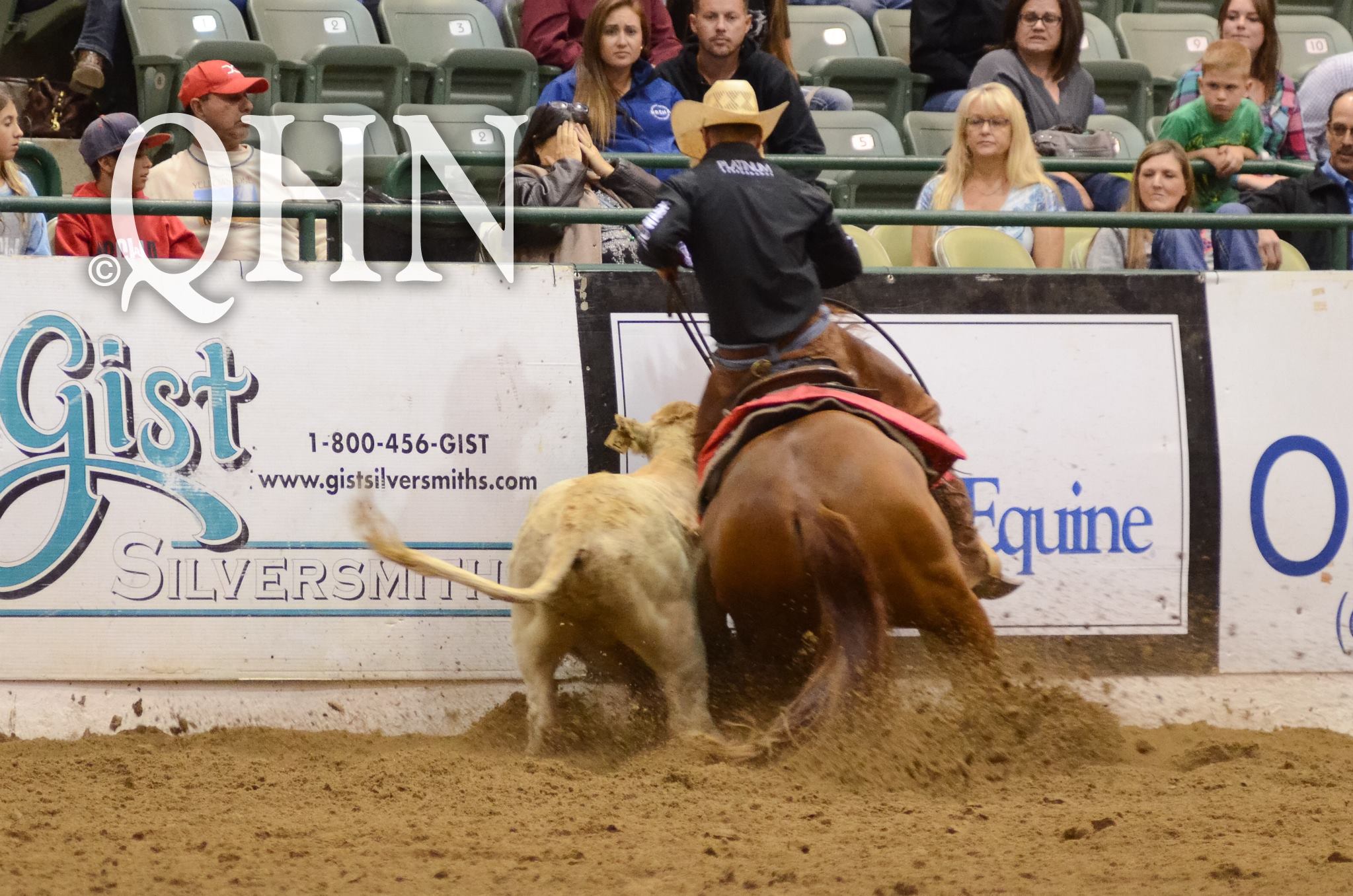 It was an unforgettable night of fence work, with 10 of the 25 finalists marking a 219 score or above. For most of the finals cow work, it appeared two-time Futurity Champion and Million Dollar Rider Corey Cushing, of Scottsdale, Arizona, and Moonstruck One Time (One Time Pepto x Moonstruck Cat x High Brow Cat), owned by Allan Kaplan, were on track to win it all. They were fourth in the working order, and made a big 221.5 run to move into the lead with a 660.5 composite.

Cushing and Moonstruck One Time maintained that lead until the 24th horse – Duals Lucky Charm (Dual Smart Rey x TRR Miss Pepcid Olena x Pepcid), a gelding shown by NRCHA top 10 Professional Kelby Phillips, of Bend, Oregon, and owned by Mark and Robyne Stewart – went down the fence. Phillips, who arrived in Reno with just more than $276,000 in lifetime earnings, had been in the Futurity Open finals before, but never won the big prize.

That all changed in the span of one fast fence work, when a score of 224.5 became a life-changing moment for the young horseman. His 663 composite score (218 herd/220.5 rein/224.5 cow) claimed the Snaffle Bit Futurity Open Championship.

“It’s great. I don’t really know what to say,” Phillips said, admitting the full impact of his achievement with Duals Lucky Charm hadn’t quite sunk in. “This horse, he’s solid every day. He doesn’t ever do anything bad. He’s been really fun to train.”

“He’s really good in the cutting. I didn’t get good cows cut for him here, especially in the prelims,” Phillips said. “In the reining, he does about the same thing every time. Every time I’ve shown him, he’s been a 220, so I can rely on him in the reining to be pretty solid there.”

Phillips knew he had to bring a big fence work score if he was to overtake Cushing for the Championship.

“I knew it was going to be plenty of cow when it came out. Brandon Buttars, he had been telling me, ‘Don’t weaken,’ so I was trying not to. Once I knocked him [the cow] around down there, I knew I had to go, because to be a big enough score to win, I knew we had to go with a little bit of cow. After the first turn, I knew he was good, because he’s always good after the first turn if I can get him out of there. And then he circles really good. I know I can turn him loose and he’ll just hunt that cow on both sides. I can trust him there,” Phillips said.

“It’s nice to know you have so many friends around here,” Phillips said.