NCHA Past President Jo Ellard presents a crystal plaque to Robert Charles Brown, one of three inductees into the NCHA Members Hall of Fame. • Courtesy of the NCHAWith its roots in the history of the West, the National Cutting Horse Association (NCHA) had its eyes on the future as the association held its annual convention in Grapevine, Texas, on June 24-26.

“We need to preserve our Western heritage in these changing times,” said incoming NCHA President Chuck Smith, of Canal Winchester, Ohio. “At the same time, we’re in a changing world, with increasing technology and faster communications. We should embrace that technology and use it to help us show the rest of the country and the rest of the world what the cutting horse is all about.”

Newcomers to the 14-member NCHA Executive Committee are Tatum Rice, of Weatherford, Texas; Jay Klamon, of Alto, Georgia, and Matt Miller, of Poolville, Texas. Jeff Fisk, of Walton, Kentucky was re-elected to the Executive Committee.

The annual convention brings together the NCHA’s directors and standing committees to develop proposals which will be considered for adoption by the Executive Committee at its next meeting in August 2016.

Common threads through the meetings were making the sport more accessible to entry-level cutters, ways to recognize competitors’ achievements, preserving the sport’s heritage and increasing purses. 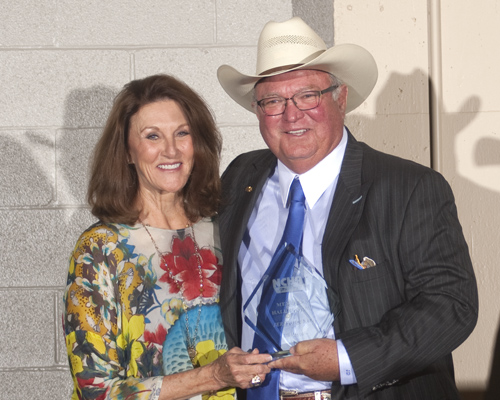 NCHA Past President Jo Ellard and NCHA Members Hall of Fame inductee Jerry Durant • Courtesy of the NCHAJunie Wood and Special Nu Baby were inducted into the NCHA Horses Hall of Fame. Junie Wood is owned by Glade Knight’s Slate River Ranch in Weatherford, Texas, and trained by John Mitchell. Special Nu Baby is owned by Gary and Shannon Barker, of Madill, Oklahoma, and was trained by Matt Gaines.

Tarin Rice, of Centerville, Texas, and Mike Wood, of Scottsdale, Arizona, were inducted into the NCHA Riders Hall of Fame.

The Alberta (Canada) Cutting Horse Association received the Affliliate of the Year Award.

Subscribe to Quarter Horse News for complete coverage of the NCHA Convention.