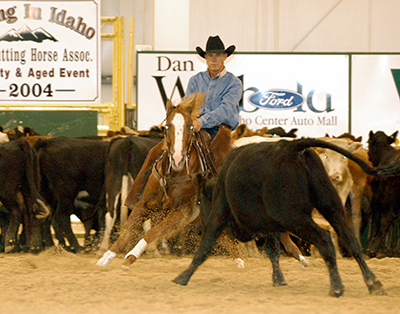 Go Little Starlight, pictured with Pete Branch in 2004, sold through the 2008 Polo Ranch Dispersal Sale and went on to produce NRCHA Snaffle Bit Futurity Open finalist CD Highlights.In the last two issues of the QHN Insider, In the Money took a look at the National Cutting Horse Association (NCHA) and National Reining Horse Association futurity Open finalists and the mares that produced them. This time, the focus shifts to Reno, Nevada, and the National Reined Cow Horse Association (NRCHA) Snaffle Bit Futurity, where there were 25 Open finalists last year. Of those, eight were out of mares that, at some point in their lives, were offered through a major Western performance horse industry sale.

While Shiney Tari, who is approaching a half-million dollars in offspring earnings, was a sale headliner when she sold for $250,000 to Aaron Ranch, Tari Darlin (Taris Catalyst x Peppys Final Desire x Freckles Merada) was a relative bargain. Dorothea Sigloch signed the $15,000 ticket on the then 18-year-old mare who sold in foal to A Shiner Named Sioux. That 2014 foal is a full sibling to 2012 stallion Dare To Sioux, who finished 14th in the NRCHA Snaffle Bit Futurity Open for owner Hope Miller and trainer Trent Pedersen.

Go Little Starlight (Grays Starlight x Go Little Lena x Smart Little Lena) had already dropped Mississippi Cat, a cutting earner of $182,978, at the time of her $42,000 sale from Polo Ranch to John McCoy. She sold as a three-in-one package with a colt by Boonlight Dancer and bred back to the same stud. While neither of those foals has an Equi-Stat record, since her sale Go Little Starlight has produced full brothers Go Little High Brow ($8,237), CDs Highest Star ($492) and CD Highlights ($33,752), all by High Brow CD. CD Highlights tied for 12th in the Snaffle Bit Futurity with Randy Paul in the saddle for owner Linda Katz.

Michelle Cannon paid $48,000 for Mereyda (Dual Rey x Merada Missy x Freckles Merada) in 2010 when the mare was in foal with No Time For A Miss (by One Time Pepto). That 2011 mare went on to earn $653 in cutting. The next year, Cannon bred Mereyda to her stallion, the late Shiners Nickle, with that cross resulting in Shiney Outlaw. The 2012 stallion finished 22nd in the Snaffle Bit Futurity Open finals under Zane Davis, and has banked a total of $28,966. Prior to the Snaffle Bit Futurity, he won the National Stock Horse Association Futurity Open.

Amanda Starlena brings an interesting story to the table, as she sold as a 5-year-old through the 2010 Western Bloodstock Invitational Mare Sale. Even at that young age, the mare had already produced $564-earner Amanda Star Smoke via embryo transfer.

“We bred that mare as a 2-year-old,” said Phil Rapp, who, along with his wife Mary Ann Rapp, owned Amanda Starlena at the time. “She had banged her eye up and had to have surgery done on the orbit of her eye, so she was out for 45-60 days. We had Smokin Trona at the time and were trying to breed some nice Smart Little Lena mares to him. So while she was there [at the veterinary clinic], we had an embryo transfer done.”

Amanda Starlena made it to the show pen as a 3-year-old, and Rapp and his wife both showed her through her 5-year-old year, when they consigned her to the sale. San Juan Ranch bought the 2005 mare (Smart Little Lena x Amanda Stargun x Playgun), who produced 2010 full siblings Waiting For Autumn and Auta Be Sumthin, both by Autumn Acre and both money-earning cutting horses. Amanda Starlena’s 2012 foal, SJR Stardom (by Dual Rey), finished 20th in the Snaffle Bit Futurity Open with Trent Pedersen riding for owner Quail Run Ranch.

SJR Stardom, pictured with Trent Pedersen, is out of cutting horse Amanda Starlena, whom San Juan Ranch bought as a 5-year-old. • Photo by Kelsey Pecsek

Two mares sold well before their broodmare years. Isabellena went through the 2007 NCHA Futurity Select 2-Year-Old Sale, where she was consigned by Doug Carpenter and purchased by Tom and Jan Merryman for $37,000. Jasons Rey Of Light was a bargain 3-year-old, bringing $7,000 at the 2006 NRCHA Performance Sale.

Isabellena (Quejanaisalena x Safari Belle x Little Safari Badger) made just $442 in 2008-09, but has outproduced herself as a broodmare. Her three money-earning sons have average earnings of $60,562, topped by Snaffle Bit Futurity Open Reserve Champion Plain Wright (by Hes Wright On), who has banked $89,523 as of late May. Erin Taormino rode the stallion for Gardiner Quarter Horses, who have since sold him to J Five Horse Ranch Management LLC. Bed Head Cat (by Wild Haired Cat) and Cuttin Wright Up (by Hes Wright On) have earnings of $49,568 and $42,596, respectively.

Plain Wright is one of eight NRCHA Snaffle Bit Futurity Open finalists who is out of a former sale horse. • Photo by Primo Morales

James Eakin sold Jasons Rey Of Light (Dual Rey x Meas Poco Starlight x Grays Starlight) to Terry Ratto. Jasons Rey Of Light was not a money-earner herself, and her first money-winning offspring is Dual Rey Mi (by Olena Oak), who tied for 12th in the Snaffle Bit Futurity Open and has a bankroll of $21,675.

Only one of the eight mares was repurchased. Shiney Sushi was a $140,000 pass out at the 2012 Carol Rose Production Sale. She is the dam of Snaffle Bit Futurity Open eighth-place finisher Cashed My CD (by CD Lights), who was ridden by Jay McLaughlin for Aaron Ranch.