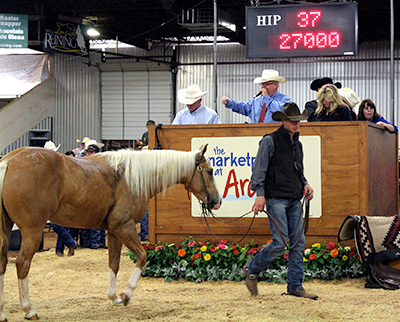 Our Hot Chic was one of the W.T. Waggoner Estate’s highest-selling mares. • Courtesy of the Marketplace at ArdmoreOn April 23, the Marketplace at Ardmore, a performance horse sale, set records for a sale average and attendance. The largest crowd in its 24-year-history, representing just about every state in the U.S., gathered in the Hardy Murphy Coliseum to watch 150 horses go through the sale ring.

Many of the attendees came for the Total Reduction Sale offering from the W.T. Waggoner Estate with hopes of placing the winning bid and taking home a part of the historic Texas ranch.

“I want to congratulate and thank horse division manager Trace Cribbs. He consigned some good horses that were well received and I appreciate his support,” Reed commented.

A sale highlight was watching legendary cowboy Wes O’Neal, who worked at the Waggoner Ranch for 58 years, demonstrate on cattle what would be the highest-selling stallion. Pocket Fulla Pepto, a 2010 red roan sired by Peptoboonsmal, brought $25,000 and was purchased by Becky Meineke.

There was a tie for the highest-selling mare, with each selling for $27,500. Metallic Rose (Metallic Cat x Haidas Lil Rose x Haidas Little Pep) was consigned by Brad Wilson and Sparkling Coyote (Shining Spark x Gallo Del Coyotes x Gallo Del Cielo) was consigned by Kathy Gentry. Sue and Lew Stephens consigned the highest-selling gelding, Catch A Cat, a 2011 High Brow Cat son and cutting winner of $19,307 who sold to Robin Branch for $29,500.

“We sold 93 percent and had a lot of happy customers – both buyers and sellers,” Reed said. “It was just a great sale.”