Smart Chic Olena was bred by Emily Woodall, of Dallas, Texas. He was purchased as a weanling by The Venturous Five Partnership and placed into the hands of Bill Glass. He made it to the semifinals of the 1988 National Cutting Horse Association (NCHA) Futurity Open, where he lost a cow. He came back in the 1989 NCHA Super Stakes to place third, and life was looking up for this young show horse.

Then fate stepped in and Smart Chic Olena suffered a hock injury in his stall that stopped his show career. Jim Babcock had wanted to buy the horse, who was out of Babcock’s price range until the injury. At that point, Babcock formed The Smart Ones Partnership with four others for $10,000 a share, and that gave him $50,000 to cover the $40,000 purchase price with enough in reserve to promote the horse.

Smart Chic Olena recovered from his injury to resume his show career. With Dell Bell in the saddle, he won the 1990 American Quarter Horse Association (AQHA) Senior Cutting World Championship and the 1990 AQHA High Point Cutting title. He earned his AQHA Superior in cutting. He was a finalist in several NCHA aged events and an American Cutting Horse Association Open Reserve World Champion. As a cutting horse, he made nearly $114,000.

The dam of Smart Chic Olena is Gay Sugar Chic, by Gay Bar King (Three Bars x Gay Widow x King P-234). Gay Bar King is out of Gay Widow, an AQHA Champion and with a Superior in halter and a winning reining horse.

The dam of Gay Sugar Chic is Chicy Little (Frisco x Bay Sugar Chic x Frisco). Frisco is an ROM show horse who is by Dodger Jr, by Dodger. Dodger is the sire of Pretty Boy, who is the broodmare sire of such AQHA Champions as Poco Lena, Poco Tivio, Poco Pine and Poco Stampede – all by Poco Bueno.

The crossover effect of Smart Chic Olena shows an interesting pedigree phenomenon in the Open champions at the 2015 NRCHA Snaffle Bit Futurity (Starlight Kisses), NRHA Futurity (Shesouttayourleague) and NCHA Futurity (Stevie Rey Von). He is the sire of the second dam of all three of these futurity winners. The second dams are Lipschic (Starlight Kisses); Collena Chic Olena (Shesouttayourleague) and Huggs Olena (Stevie Rey Von). 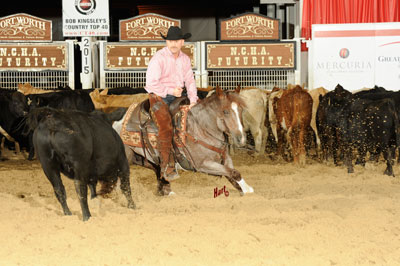 Smart Chic Olena’s first career was as a cutting horse, and the stallion shows up in pedigrees of some of today’s top cutters, such as NCHA Futurity Open Champion Stevie Rey Von (pictured with Ed Dufurrena). • Hart Photos 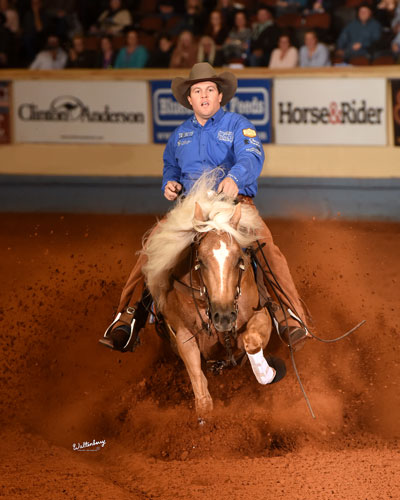 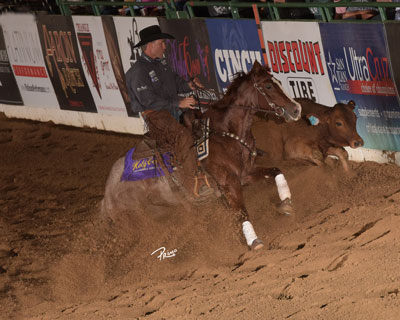 This pattern continues with ARC Gunnabeabigstar, the 2014 NRHA Futurity Open Co-Champion and a half-brother to Shesouttayourleague, and Purple Reyn, the 2015 NCHA Non-Pro Horse of the Year and full sister to Stevie Rey Von.
When Jim Babcock bought Smart Chic Olena, he had to get him shown and draw attention to him to bring mares to his court. He did it by showing him in AQHA, NCHA, ACHA and NRHA events. The plan worked, as Smart Chic Olena has had a great influence on the versatility of the American Quarter Horse as shown by these major winners in 2015.

Did you miss a story, photo, or stat in a previous Insider, or do you just want to revisit a particular column you enjoyed? Click here to visit the QHN Insider Archive.