Many non-pro reiners are always on the lookout for their next National Reining Horse Association (NRHA) Futurity horse.

Legend Slides Wright is by Custom Legend ($228,398), who won the National Reining Breeders Classic (NRBC) Derby Level 4 Open with Andrea in 2007. Custom Legend is by Custom Crome ($107,193), who was ridden by Mike Flarida to the 1993 NRHA Futurity Open Championship. Custom Crome is by Crome Plated Jac (Hollywood Jac 86 x Miss Doll Pine x Great Pine), who has sired horses that have won $284,883.

Custom Crome is an Equi-Stat Elite $3 Million Sire. His top money-earning foals include Custom Pistol ($254,867), Custom Mahogany ($200,338), Custom Red Berry ($183,374) and, of course, Custom Legend. All four of those horses were bred by Simon, who owns and stands Custom Legend in Marietta, Oklahoma. 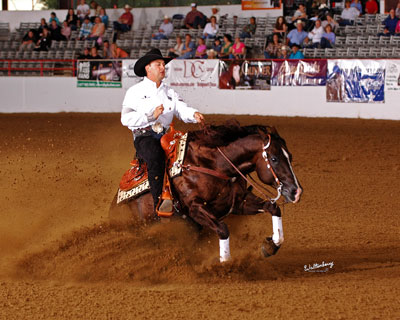 Custom Legend and Andrea Fappani marked a record-setting 236.5 in a runoff to win the 10th anniversary edition of the NRBC. • Photo by Waltenberry

She Slides Wright is out of Slide Me Again, an AQHA Reserve World Champion in Senior Reining and an AQHA High Point Heeling Mare who has earned Superiors in Heading and Heeling. She is the dam of horses that have won $247,392, including Lenas Wright On, a full brother to She Slides Wright. Lenas Wright On is an NRHA Futurity Open Champion and an AQHA World Champion in Junior Working Cow Horse. He is the sire of foals that have earned $1.4 million including Hes Wright On ($169,567, out of Shesa Lota Nic x Reminic). She Slides Wright is also a full sister to Love Em N Lena ($114,190) and Smart Sliden Lena ($15,168).