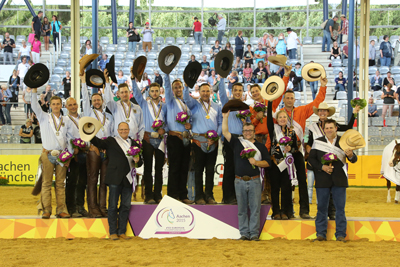 In a field of 40 competitors, and with 8 horse-and-rider combinations to go, the podium was determined by a superb performance from Italy’s Giovanni Masi De Vargas and Dance Little Spook.

Aboard the 7-year-old Quarter Dream-owned mare by Smart Spook and out of the Topsail Cody daughter Sailors Dance, the young Italian rider posted a 221.5. Equaling the top score of the day was Germany’s Grisha Ludwig and Shine My Gun. The 8-year-old stallion (Colonels Smoking Gun [Gunner] x Shiners Mistress x Shining Spark), owned by Stephanie Madaus, thrilled the crowd, executing the only plus-1.5 spins of the day. Once the duo finished the performance, they secured Germany’s European team silver medal.

“I am simply thrilled,” said Italian team coach Filippo Masi De Vargas. “This squad is made up of young riders – the future of our discipline – and they were just great, very professional and full of enthusiasm. The only ‘older’ rider is Pierluigi Fabbri, who was also on the team in the past edition. He had to endure the pressure of opening the competition today and did a great job giving the other athletes on the team the confidence they needed.”

In the 2013 edition of the Championships, Italy took team silver behind Germany and this year, again on German soil, the battle was on from the first to the last competitor. With only 10 horse-and-rider combinations left to go, Italy, with 651 points, The Netherlands, with 637, and France, with 634.5, were vying for the medals. The situation was soon to change following Masi De Vargas’ performance, which put Italy in the lead. But still, the highest step of the podium was undecided.

The gold and silver medals were determined after Ludwig’s run, but reining enthusiasts had to wait until the last competitor of the day to find out which nation would complete the podium. Rieky Young Van Osch, of The Netherlands, who performed aboard her Brady Chex (Buenonic Chex x Somethingtocrowabout x Gallo Del Cielo [Rooster]) ended up posting a 214, enough to earn the bronze.

Just off the podium was team Great Britain, with three competitors and a total of 635 points. Francesca Sternberg and Ten Reasons (Hang Ten Surprize x Hotroddin Catalyst x Taris Catalyst) closed with a 215.5, enough to advance automatically to the individual competition on Sunday. “Ten Reasons just gave me another reason why my husband, Doug, chose him!” said an enthused Sternberg following her run.