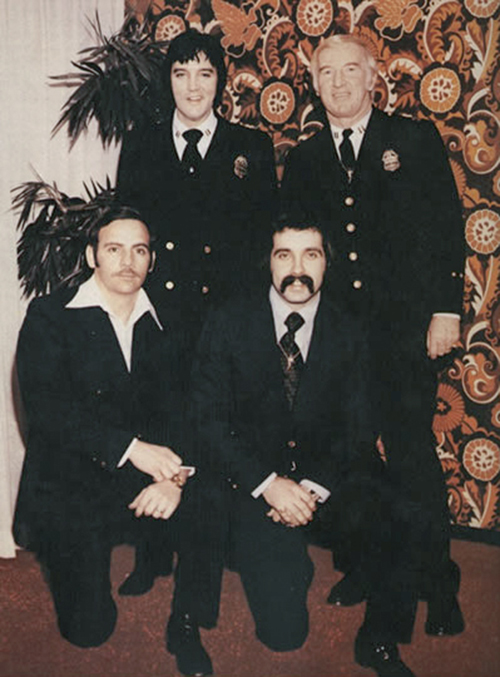 Elvis (upper left) in 1975, dressed in Denver police captain’s attire to camouflage him when they took him to dinner. Pictured with Elvis are Captain Jerry Kennedy (top right), Bob Cantwell (lower left) and Detective Ron Pietrafeso (lower right). • Courtesy of Ron PietrafesoBefore Ron Pietrafeso hit the open road with his family – wife Adrienne and daughters Nicole, Jessica and Gianna – on the weekend cutting circuit, he used to roll with the King himself. Pietrafeso, then a Denver police officer, met Elvis Presley while working an extra security gig in Colorado. The Colorado cop and the singer from Tupelo, Mississippi, quickly became friends.

“He ended up buying me a Cadillac. I ended up traveling with him on tour several times throughout the United States,” Pietrafeso said. “I was friends with him up until the time he died. We became really, really close.”

Although most known for his stage presence, the real Elvis was a regular person – the kind of guy who was known to ride around with police officers in a squad car for fun, Pietrafeso said.

“Down deep he was just like you and I,” Pietrafeso said. “There was that show business part of him that was for stage purposes. I think that was why he and I got along so good, because down deep he just wanted to be a normal person on his off time and he was just fun to be around.”

The family has photos of Elvis in their home, including one of Elvis dressed in a police captain’s uniform. They also named one of their 2010 foals Cats Call Me Elvis, in honor of the King.

“He was a great guy,” Pietrafeso said. “He was the most giving, great person.”