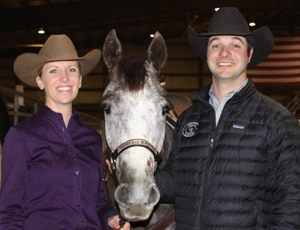 Matt Miller, pictured with his wife, Megan, and Sweet Lil AmandaChris and Tracy Brengard’s Sweet Lil Amanda (High Brow CD x Amanda Stargun x Playgun) and Matt Miller were the 23rd team to work in the 24-horse finals at The Cattlemen’s Derby Open finals, held March 5 in Graham, Texas. The 4-year-old mare marked a 215 in the first go and a 217 in the second, but she saved her best for last, leaving the pen with a 225.

“It was pretty perfect actually,” Miller, of Poolville, Texas, said after the run. “We cut three really good cows. We were really deep – we were second to last. I actually had a lot of cows left that I liked. It just happened that they all came right up to where they needed to be and stayed right in the middle of the pen. All three cows were right here in the center; I never had to go outside to the wall, and the mare couldn’t have been any better.”

Sweet Lil Amanda, bred by Sunrise Ranch, of Fayetteville, Arkansas, won The Ike on Feb. 4, and she picked up $13,000 for her Derby Open Championship at The Cattlemen’s to add to her growing bank.

Rusty Simpson’s Metallic Little Cat (Metallic Cat x Seca Rey Lena x Dual Rey) and Clay Johnson, of Whitt, Texas, were 11th in the draw and led with a 220.5, but that score was adjusted to a 221 after the judges’ review.

Metallic Little Cat, who was 10th at the 2014 National Cutting Horse Association (NCHA) Futurity, marked a 216 in both the first and second go-rounds at The Cattlemen’s. The mare’s run in the finals was enough to finish as the Co-Reserve Champion.

Bet This Girls A Cat and Metallic Little Cat each received $10,750 for their Co-Reserve championships.

The field in the Classic division for 5- and 6-year-olds started with 63 entries, and the March 4 finals had 13 horses competing for a total purse of $92,912.

Fourth to work in the finals, Phil Rapp and Reyzin marked a 221. Bred by Rapp and his wife, Mary Ann Rapp, Reyzin (High Brow CD x Miss Reycine x Dual Rey) marked a 216.5 in the first go and a 218.5 in the second to advance to the finals.

Owned by Gale Force Quarter Horses, of Conway, South Carolina, the 6-year old mare has been a finalist at The Ike, the Bonanza Cutting and the Houston Livestock Show & Rodeo leg of the Mercuria/NCHA World Series of Cutting this year.

“We’ve been busy,” Rapp said after listing off the mare’s latest accomplishments. He had two in The Cattlemen’s finals and made back-to-back runs. “I just wanted to have a couple of clean runs and get a good check. She was really strong, had some good stops and was really bright in the middle. We were very fortunate. It was a strong field of horses and a very tough finals. If you can tie Junie Wood, you’ve really done something. I give a lot of credit to them. They are such a formidable pair.”

Junie Wood (Nitas Wood x Tuffs Junie x Tuff Lena) and trainer John Mitchell, of Weatherford, Texas, were 11th in the draw and tied the 221 mark. Bred by Craig and Janet Crumpler, of Wichita Falls, Texas, and owned by Glade Knight’s Slate River Ranch, of Weatherford, Junie Wood marked a 218 in the first go and a 219 in the second to advance to the finals.

When asked if he was getting tired of talking about Junie Wood, who recently won the Bonanza Cutting, Mitchell replied with a laugh, “I don’t think so!”

“On that last cow she was just outstanding,” he continued about the run. “The cows I needed to win on needed to be quick and testy. I drew deep in the bunch again, so I knew that I was going to be left with the cows that I really didn’t want to cut because they looked like too much, but they were probably going to be pretty good if I was going to win.

“The last cow was outstanding and made the run. [Junie Wood] just made it look easy again, but that was a very tough situation because that cow was tough and crazy and hot and fast. She gives you the confidence to go try them anyway. I thought Phil had a really good run tonight, too.”

Reyzin and Junie Wood each received $13,000 for the victory.

For complete coverage of The Cattlemen’s Derby & Classic, subscribe to Quarter Horse News.