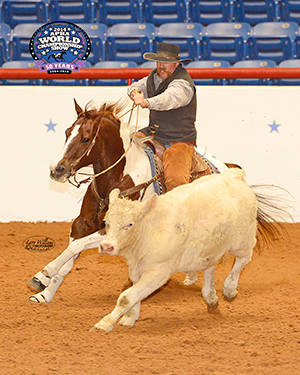 But two World Championships in two days does not surprise Rodgers.

“He’s just a good stick,” she said. “I’m privileged to get to ride and show him, and to coach Chris. He’s a pretty cool horse.”

Lenas Flyin Delta CT, or “Flyer”, has won previous APHA World titles in roping. This week, he will back into the roping box once again with Jay Wadhams in the saddle. Then, near the conclusion of the APHA World Show, Rodgers will ride to the herd in the cutting.

The horse that earns the most points in cattle classes is awarded the Oscar Crigler Cattle Horse Award, and Lytle hopes her gelding has a shot at the title this year. Although the Amateur Working Cow Horse win does not count toward the Oscar Crigler Award, Lytle was all smiles after her championship run.

She has owned Flyer for several years and had always showed the gelding in reining. Just a short two years ago, she decided to enter in working cow horse and go down the fence. Her 414 was enough to win the class, while Sandy Kaplan and Smoketacular (PT) (Doc N Smoke x SS Royalena x Manassah Fortyfive) finished with a 409.5 and the Reserve Championship.

The Junior Working Cow Horse title went to Big Diamonds To Cash (PT), a 2010 mare by Big Chex To Cash and out of Like A Playgirl, by Like A Diamond, ridden by Rick Steed.

“We bought her a few years ago and knew she was going to be one of our next really good horses. Last year, I showed her here and coasted her around. This year, she was really ready to go to work,” Steed said of the horse his wife owns.