Madalyn, Joel Sr. & Blakley Colgrove It was a Colgrove family affair on July 23 during the National Cutting Horse Association (NCHA) Summer Spectacular Derby Amateur and Classic/Challenge Amateur finals – sisters Blakley and Madalyn each took home a title. Their grandfather, Joel M. Colgrove Sr., got in on the fun, too, taking reserve champion honors in the Derby Amateur.

Joel, who is called “Bear” by his grandkids, was second to work in the first set and set the bar at 216 riding One Time Jazz (One Time Pepto x Stylish Little Jewel x Playin Stylish). Blakely was second to work in the second set and marked a 219 with Sassy Lil Sue (High Brow CD x Peptos Stylish Sue x Peptos Stylish Oak). The Colgrove family lives in Boligee, Ala. Blakely earned $5,406 for the victory, and Joel earned $5,185.

Blakely said she knew she was having a good run on the second cow and the best thing about Sassy Lil Sue is her personality.

Joel, who took a break from cutting for a while but was drawn back by his granddaughters. He says it’s fun to compete, but it’s more fun to watch his grandkids.

“It’s a family sport,” Joel said of what attracted him to cutting. “I thought it would be something good for the kids. We’ve really been blessed.”

Joel describes Blakley as being very quiet. He says that once you get to know Madalyn, she’s more of the joker in the family.

“They work hard at it, and they have a lot of good help,” Joel says about the girls. “It’s really hard work and being with good people.”

Blakley, who will turn 13 in August, and Madalyn, 14, started being home schooled so they could go to more cuttings.

In the Classic/Challenge Amateur finals, Madalyn and Hes A Heapinspoonful (Hes A Peptospoonful x Miss Hickory Hill x Docs Hickory) were 23rd in the draw and eighth in the second set. The duo marked a 222.

“He felt really good when I got on him, and I just went out there, cut clean and hoped for the best,” Madalyn said. “He was probably the best that he’s ever been. After my second cow, I knew that I was having a good run. He has a good stop and he really doesn’t ever make a miss because he’s so strong he can just get back to it.”

Cameron Thompson and Hard Eight BBQ (Boonlight Dancer x Commanders Legacy x Genuine Legacy) were one point back after earning a 221 as the eighth draw in the first set. Thompson, of Crossville, Tenn., is a junior majoring in animal science at Auburn University and plans to follow his dad into a career in veterinary medicine.

“She loves to run out there and hit big stops,” Thompson said. “That second cow that was pushing on me just let her shine and get some of those big stops in. That’s where most of my points came from.

Madalyn took home a check for $6,607 as the champion, and Thompson earned $6,329 as the reserve champion. 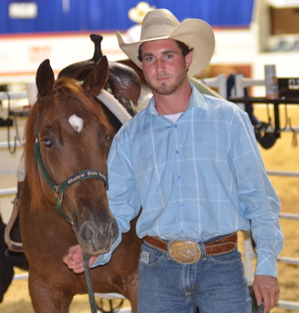 Who Dat Kitty & Taylor CarboAnother exciting day of finals at the Summer Spectacular brought cutters and cutting fans together in Fort Worth, Texas, during the Unlimited Amateur finals. In the Derby Unlimited Amateur, 31 horse-and-rider duos competed for the title, but a late-round 222 score by Taylor Carbo and Who Dat Kitty topped the rest of the field and secured their victory.

“Every time you do well in this pen, it’s unbelievable,” said Carbo, of Plaquemine, La. “We cut the cows we wanted to cut. I started off good; a run I knew we could build from. My horse was accurate. I felt like I did a good job showing her and she did her part.”

Carbo and his 4-year-old mare (High Brow Cat x Play Like Clay x Freckles Playboy), bred by Winnfield, La., resident Teddy Price, marked a first go-round score of 214. Their finals run came with a paycheck worth $7,016, which pushed Carbo’s Equi-Stat record to more than $152,000, and Who Dat Kitty, who was purchased by Carbo during this year’s NCHA Super Stakes, now boasts more than $13,800.

The Derby Unlimited Amateur Reserve Championship went to Jaylee Hall, of Weatherford, Texas, and her mount High Brow CD Deuce (High Brow CD x WJ Pretty In Pink x Peptoboonsmal), owned by Hall and her mother, Shelly. The duo marked a score of 218 to take the title and earn $6,716.

Smooth As A Huntress & John BrengardThe Classic/Challenge Unlimited Amateur had 33 finalists, and the bar was set high from the second draw when John Brengard marked an impressive score of 219 aboard Smooth As A Huntress (Smooth As A Cat x Dual Huntress x Dual Pep), owned by Chris Brengard and bred by Jerry Yelverton, of Russellville, Ark. The duo started off strong from the first go-round, where they marked a 216. Their finals run may have been marked early on, but it proved to be a tough score to beat, and they walked away with the title and earned a hefty paycheck worth $7,989.

“I was extremely nervous,” Brengard said of having to wait out the other runs. “There was a couple [I thought], ‘That was a really good run.’ I got lucky.”

For full coverage of the NCHA Summer Spectacular, subscribe to Quarter Horse News.