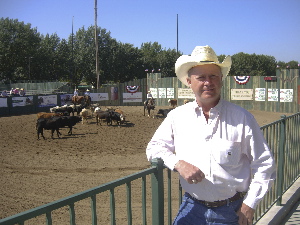 Mark ThompsonQuarter Horse News (QHN) lost an important member of its team when Cutting Editor Mark Thompson, 52, passed away from natural causes on June 23. Thompson, the grandson of National Reining Horse Association Hall of Famer Clayton Woosley, worked for the publication for 14 years, as a freelance writer and fulltime employee.

Curious and imaginative, Thompson had a tremendous talent for finding the story behind the story. Perhaps his favorite article was his 2006 Music City Futurity event coverage story. That’s when Thompson met Patrick Collins and wrote a corresponding article that introduced the performance horse world to Collins and his wife, Laura. Two months later at the National Cutting Horse Association (NCHA) Futurity, the Collins’ horse Oh Cay Felix won the Open and the Amateur.

That was just one of many stories Thompson mined from the horse industry he loved. Among his co-workers, Thompson was recognized for his passion and tenacity in pitching unique story ideas.

Thompson’s reporting was rooted first in sports. He graduated from Indiana State University in Terre Haute, Indiana. While there, Thompson worked for the student newspaper where he was named by co-workers as the “Most Outstanding Reporter.” It was a distinction well earned considering Thompson’s idea to interview basketball coach Bobby Knight after the infamous chair-throwing incident during a game between Indiana and Perdue. That article, “Charlie Chair,” garnered widespread accolades and was published in several newspapers. As a student reporter, Thompson also interviewed Larry Bird and a then-standout rookie by the name of Michael Jordan.

Prior to his employment with QHN, Thompson worked for several newspapers, including the Weatherford Democrat and Fort Worth Star-Telegram. Thompson would often recollect stories about working the crime beat, where he reported on actions that started in the streets and ended up in the courts.

Thompson’s ability to navigate the judicial system proved fortuitous when he was assigned to cover various lawsuits within the performance horse business. When he believed there was a story that should be covered, he would begin his pitch with, “The bottom line is…” Thompson went to extraordinary lengths to obtain interviews with plaintiffs and defendants, and in the process he garnered trust and respect from subjects on both sides of the legal cases. Thompson was always fair and objective in his reporting.

Professionally recognized many times for his reporting, two days before his death Thompson learned that the American Horse Publications named him as the nation’s top writer in the Online Reporting category. The story was about Linda Kay Pharis’ August 2013 conviction of livestock cruelty in connection to a situation that resulted in the death of nine horses, including 1990 NCHA Futurity Open Champion Millie Montana. Like so many of the stories Thompson took on, he got the job done with objectivity and true professionalism.

The bottom line is – QHN and the horse industry are going to miss Mark Thompson.