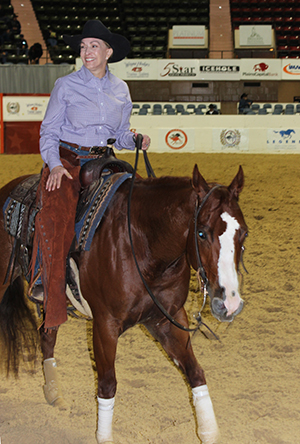 Lisa Bankston is all smiles as she exits the pen on “Piper” after marking a 221, the highest score of the day.Mondays are usually a day of dread as a new work week begins, but the National Cutting Horse Association (NCHA) Super Stakes packed April 8 with a day full of Amateur cutting finals. More than $375,000 was awarded to the finalists in the Amateur and Unlimited Amateur, as well as the Classic Amateur and Unlimited Amateur finals.

The day started with 35 finalists in the Super Stakes Classic Amateur finals, which had a purse of $92,116. As the 32nd horse to work, Fort Worth Pipeline added another championship  to her long list of accomplishments that includes two American Quarter Horse Association (AQHA) World titles. Riding in her hometown, Lisa Bankston rode her homebred to a 221 and earned $5,578 for the victory. Fort Worth Pipeline is a 6-year-old mare by Cats Merada out of the Mr Skyline Peppy mare Fort Worth Skyline.

There was a three-way tie for second in the Super Stakes Classic Amateur finals between Shannon McCoy of Weatherford, Texas; Doug Irvin of Hollidaysburg, Penn.; and Amanda Standish of Baton Rouge, La. All four of the top riders worked in the second set. McCoy, Irvin and Standish each earned $5,160 for their runner-up performances.

Next up was the 32-horse Super Stakes Amateur finals, with a total purse of $85,303. With the fourth draw in the finals, Ron Malone of Petaluma, Calif., rode Rubys CD to a 219 to take the trophy and $6,134. Rubys CD is by High Brow CD and out of the Freckles Playboy mare Playboys Ruby. Malone was also the Senior Champion.

Immediately following Malone, Zachary Bahm of Stillwater, Okla., earned a 215 on Cat Duallin Doll (WR This Cats Smart x CK Dual Doll 144 x Dual Pep). With the final work in the first set, Blakley Colgrove of Boligee, Ala., tied the 215 on Sassy Lil Sue, a mare by High Brow CD out of the Peptos Stylish Oak mare Peptos Stylish Sue. With the next to last draw in the finals, Stephen Silva of Templeton, California, also staked his claim on the co-reserve championship with One Precious Pepto (Peptoboonsmal x Lenas Good Nus x Lenas Jewel Bars). Bahm, Colgrove and Silva each earned $5,620.

Jo Anne and Jim Corollo with What A ReyThe Super Stakes Classic Unlimited Amateur finals featured 30 horses and a purse of $92,478. Fifth in the working order, Jo Anne Carollo of Atascadero, Calif., and her homebred What A Rey marked a 220 and earned $6,998. Carollo thanked her husband, Jim, for loping the 6-year-old mare in preparation for the finals. What A Rey is by TR Dual Rey and out of Roosters Chicaroo, by Gallo Del Cielo.

Working sixth in the second set, Bobby Ray Hawkins, of Seguin, Texas, and Lil Ruby Rey marked a 217.5 to win the Super Stakes Unlimited Amateur and $8,269 of the $105,827 purse. Lil Ruby Rey is a 4-year-old gelding by TR Dual Rey and out of the Smart Little Lena mare ARC Little Rubylena.

Just a half-point back at 217, Wade Smith of Geary, Okla., and Robert Tiemann, of Pflugerville, Texas, shared the Reserve Championship. They each received $7,724. Smith followed Hawkins in the draw and rode Lil Pep N Time, who is by One Time Pepto and out of Shortys Lil Pep, by Dual Pep. Tiemann worked fifth in the first set and rode Foxy Spoonful, who is by Hes A Peptospoonful and out of the Shorty Lena mare Shortys Pretty Lady. Tiemann was also the Senior Champion.

The NCHA Super Stakes continues at Will Rogers Coliseum in Fort Worth, Texas, through April 19.