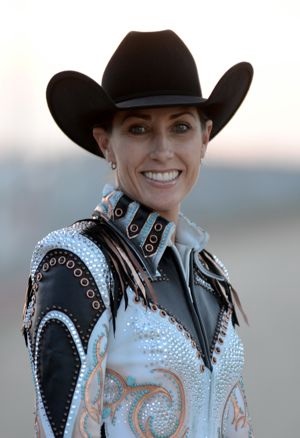 Tish FappaniThe Cactus Reining Classic, held March 5-9 in Scottsdale, Ariz., attracted horses and competitors from near and far to the WestWorld of Scottsdale Equidome arena. During the Protect the Harvest Derby Non-Pro, Tish Fappani rode two horses to Level 4 paychecks.

From later in the class, Fappani piloted Big Creme Chic (Big Chex To Cash x Cremes Chic Olena x Smart Chic Olena) to a 217, which tied the duo for sixth with Cade McCutcheon and A Shining Sidekick. That finish earned $2,208 for both horse-and-rider teams.

There was a three-way tie for Reserve, which paid $3,793 to each duo. Who Loves You, shown by Cam Essick, Wimpys Little Roo, shown by Kim Muehlstaetter, and Shiney Enterprise, shown by Mandy McCutcheon marked a 218 for second-place honors.

In addition to tying for the Level 4 Reserve title, Cam Essick and homebred Who Loves You topped the Level 3 and Prime Time Non-Pro divisions with a 218. The Level 3 Championship paid $4,070, which combined with the duo’s Level 4 paycheck and $2,024 Prime Time check to bring their event total to $9,887.

Stephanie Porath rode George and Robyn King’s Conquista Holly to a 217.5, which ranked second in the Level 3. The horse and rider picked up a check for $2,477 for their Reserve title, along with $2,717 for finishing fifth in the Level 4.

George King piloted his own Nifty Rooster to a 215 in the Prime Time to tie with Dr. James Morgan and This Chic L Whimp U for second. King and Morgan each took home a check for $1,078.

George King and Nifty Rooster added $2,761 to their $1,078 Prime Time award when their 215 bested the field of Level 2 Non-Pro exhibitors. The Level 2 Reserve title was split four ways with a 214.5 and paid $1,246 to each of the following second-place duos:

Level 2 Non-Pro Reserve Champions Samantha Belcher, Kristin Darnall-Titov and Brenda Joyce also split the Level 1 win. The riders picked up an additional $982 each for their 214.5 scores.

For complete coverage of the Cactus Reining Classic, subscribe to Quarter Horse News.