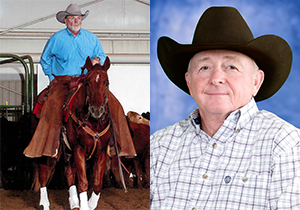 Smith, 65, of Canal Winchester, Ohio, discovered cutting while in his mid 30s after previously competing in reining. NCHA and National Reining Horse Association (NRHA) Hall of Fame rider Dale Wilkinson introduced him to the sport. He served as vice president of the NRHA for two years, before later becoming a full-time cutting trainer.

Since then, he has trained many cutting horses and amateur riders to compete. A former director of the University of Findlay’s equestrian program, Smith has also served since 1991 as the cutting coordinator at the All American Quarter Horse Congress in Columbus, Ohio. The NCHA has made some good moves lately, but needs to balance things a little better, Smith said.

“We have done an outstanding job working with the Triple Crown events in Fort Worth and making it very attractive at the top end,” Smith said. “We’ve also done a very good job at the top end of the weekend program. Where we are lacking is helping the local affiliates promote the sport. What I want to do is focus on that part of the program and bring it more into balance.”

Mulligan, 71, of Jackson, Wyo., spent four years during his early 30s as mayor of New Brunswick, N.J. He then headed west to work as an attorney, and he learned to cut. He’s serving as this year’s chairman of the NCHA Long-Range Planning Committee. His legal skills have also helped the association re-write several constitution terms and bylaws approved by the general membership.

“I managed a large city. I’ve got familiarity with large budgets and management and I hope that makes me qualified,” Mulligan said.

Ballots with background information on both candidates will be sent electronically and by mail to all NCHA members in the near future, the NCHA said, with member votes \ to be sent back and tabulated by the association on June 10.

President-elect Bill Richerson, of Alexandria, La., will become the NCHA president in June at the next NCHA Convention in Fort Worth, Texas. Jo Ellard, of Whitesboro, Texas, will also become the next president-elect at that time.

The winner of this year’s vice president’s race between Mulligan and Smith will  serve as NCHA president for one year, starting in June 2016.