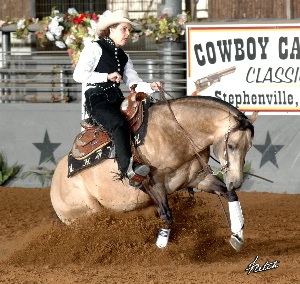 Liz Haverty & Whodini • Photo by FletchThe reining community is mourning the loss of horsewoman Elizabeth “Liz” Haverty, 62, who lost her battle with cancer Sunday, Jan. 26. Her influence in the industry will truly be missed.

Haverty’s husband of 37 years, Clint, is a National Reining Horse Association (NRHA) Hall of Famer, and Haverty was a lifetime member of the NRHA. Equi-Stat shows her record at $24,425, including much success on Whodini, a 2006 son of homebred stallion Who Whiz It and the Colonels Smoking Gun (Gunner) mare Sugar Pop Gun 1998. In total, the duo earned $4,315 together.

Haverty’s son, Zane, and Clint also competed with Whodini, who has amassed $45,455 so far in his career, according to Equi-Stat. Haverty’s leading mount in the show pen was the family’s stallion Who Whiz It, who carried the late horsewoman to checks totaling $7,977.

Haverty, of Krum, Texas, also showed Prettywhizprettydoes (Topsail Whiz x Blonde At The Bar x Hollywood Jac 86) to $5,791 in the arena. The 2002 mare is the dam of reining’s only Triple Crown stallion, Spooks Gotta Whiz, a 2007 Spooks Gotta Gun stallion that the Havertys bred.

Services to celebrate Haverty’s life are scheduled for 2 p.m. on Friday, Jan. 31, in the Chapel of DeBerry Funeral Directors in Denton, Texas. In lieu of flowers, the family asks that donations be made to the NRHA, c/o Reining Horse Sports Foundation, 3000 NW 10th St., Oklahoma City, OK 73107-5302.