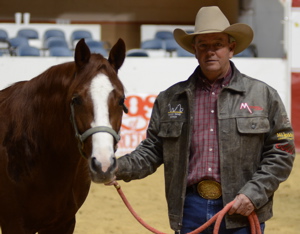 Junie Wood & Craig CrumplerWith a huge crowd filling the seats of Will Rogers Coliseum in Fort Worth, Texas, the National Cutting Horse Association (NCHA) Futurity Non-Pro finals kicked off Thursday, Dec. 12. With 26 horse-and-rider teams in the finals, it was Craig Crumpler and Junie Wood who came out on top with the Championship.

Crumpler, of Wichita Falls, Texas, rode into the herd second to last in the first of two sets aboard the young homebred mare (Nitas Wood x Tuffs Junie x Tuff Lena), whom he owns with his wife, Janet. In the first and second goes, they marked a 213.5 and a 214.5, respectively, for a composite score of 428. In the semifinals, they climbed the charts, taking second place with a 217, only one-half point behind the leading score.

Each run seemed to gain them more momentum leading into the Non-Pro finals. Coming out second to last in the first of two sets, the duo marked a score of 220.5 to take the lead, but with 14 more horses to go, anything could happen. Nevertheless, the score held to the end, and the winning pair received a Champion’s check for more than $55,000.

Taking the Co-Reserve Championship was Sam Good, of Mansfield, Texas, and Reys Smart Lookin (Dual Rey x The Smart Look x Smart Little Lena), bred by Strawn Valley Ranch, of Strawn, Texas. As the second to go in the first set, Good marked a 219 aboard the stallion, and took home a check for nearly $53,000.

Sharing in the Co-Reserve Championship with a 219 was Kelle Chartier, of Cottrellville, Mich., and Thankyamuch (Wilds My Thing x Sweet Camille x Chicks Achy Braky), bred by Bobby and Francie Butler, of Weatherford, Texas. The duo’s early score earned them a check nearing $53,000.

The Senior Non-Pro Championship went to Monty Johnson, of Weatherford, Texas, and RW Rockin (Dual Rey x Boon San Kitty x High Brow Cat), bred by Walton’s Rocking W Ranch Inc., of Millsap, Texas. As the only Senior to qualify for the Non-Pro finals, he and the mare marked scores of 215.5 and 211 in the first and second goes, respectively, and a 214.5 in the semifinals. Their finals run earned them a check for nearly $13,000. Johnson also showed RW Rockin in the Unlimited Amateur finals earlier in the day to garner an additional check worth more than $2,800.

Subscribe to Quarter Horse News for full coverage of the NCHA Futurity and other major events.