Revolution Is Dun and Martin LarcombeThe biggest event at the Billingsley Ford Southwest Reining Horse Association (SWRHA) Futurity and Show, held Oct. 17-27, was the John Deere Open Futurity. It became evident early on that it would take a big score to win it, but in the end, it was Revolution Is Dun and Martin Larcombe who came out on top to win the Futurity Levels 4, 3 and 2 Open on Oct. 26.

When it came down to the second to last horse, Dany Tremblay was leading the pack with a 228.5 on The Wizter owned by MG Reiners of St. Paul, Quebec. Dell Hendricks was just behind with a 228 on Breakout Wrangler, owned by Dan Lindstrom of Gretna, Neb.

Then, it was Martin Larcombe’s turn on Revolution Is Dun, owned by XCS Ranch. “I knew there were a lot of high scores,” he said shortly after his run. “I just wanted to have a good go.”

Larcombe had better than a good go; he knocked one into the rafters with a scalding performance that netted a 230 point reward – good enough to win the Levels 4, 3 and 2 Open.

“Richard did a great job of starting him and I really liked him although I looked at him three times before I bought him,” Larcombe remembers, then laughs. “I’m glad I did!”

John Deere Sales Promotion Coordinator Britt Cassaday and Regional Service Coordinator Doug Wick were on hand to present the John Deere Gator sponsored by John Deere and Pettit Machinery for the win. The Level 4 victory also netted $16,926, a Lawson Bronze and a trophy buckle. That, added to his take for the Levels 3 and 2 wins, gave him a total paycheck of $28,467.

Finishing as the Reserve Champion in the Level 3 was Dany Tremblay on The Wizster (Gallo Del Cielo X Miss Whizard Jac). The Reserve Title in the Level 2 went to Jared Leclair with a score of 225 on Electric Express (Jacs Electric Spark X Hot Coded Candy) owned by Terry Ranch of Hardin, Texas.

Earlier in the day, it was a rainy afternoon in Ardmore, Oklahoma, and inside the Hardy Murphy Coliseum, the lights were flickering, even going out during one run. But when Mirjam Stillo came on Little Joe Vintage, she illuminated the place, scoring 220.5 to win the John Deere Tractor Open Futurity Level 1 Championship.

Little Joe Vintage is owned by Harper Conner of Dallas, Texas, who also owns his sire, A Sparkling Vintage. Both horses were recently moved to Tom McCutcheon Reining Horses, where Mirjam trains, and A Sparkling Vintage will stand there in 2014. The Level 1 Championship came with a commemorative trophy buckle sponsored by Ardmore First Bank and Trust. 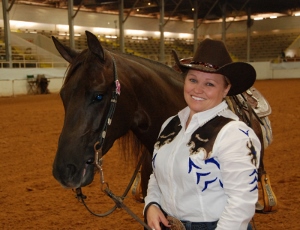 She’d never shown the mare before. “I needed another one to show. She was raised on our place and (husband) Tom had shown her in Minnesota in August for owner Roxanne Koepsell. She’s too small for him, and she looked like she’d fit me so we bought her. I just got her a week ago.”

McCutcheon won $5,242 for the Championship, along with a special tooled Bob’s Custom Saddle and a trophy buckle sponsored by Cardinal Training Center. She added another $3,191 to her take from the show on Check Out My Guns (Colonels Smoking Gun [Gunner] X Darlins Not Painted), marking a 223.5 to earn the Reserve Championship.

Brianna Sloan rode Pryce Tag (Whiz N Tag Chex X Chic Lil Ruby) to the Level 3 Non-Pro Championship with a score of 221.5. She bought the gelding at the end of May from Carlos and Laurie Deleu. “He was a little green, still, when I showed him at Tulsa, but I felt I was close.”

The next trip for Sloan and “Pryce” was at the Heritage Futurity in Katy, Texas, where she tied for the win. “I knew he got better each time and I knew I had more horse here.”

She earned $1,985 and received a special Bob’s Custom Saddle, along with a trophy buckle sponsored by Cardinal Training Center.

The  Level 3 Non-Pro Reserve title and the Level 2 Non-Pro Championship went to Lauren Hall on West Coast Maid, a daughter of West Coast Whiz out of Shining Maid. Hall earned $1,203 for the Limited Non Pro win, along with a Bob’s Custom Saddle for her score of 219.5.

Samantha Larcombe rode Western Electric to the Level 1 Non-Pro Championship, scoring a 212 for the win and edging Teresa Putman of Gainesville, Texas by half a point on Loveandotherdisasters.

In the past, Lance Griffin has owned quite a few good horses that his daughter, Samantha Burns, has shown. But he had never shown a horse owned by Samantha!

That all changed at Ardmore, when he rode Stiletto Tag (Whiz N Tag Chex X Kachina Oak Olena) to a score of 219.5 to win the Prime Time Non Pro title. Samantha had ridden the horse to a reserve finish at Las Vegas, then had to have neck surgery, so Lance found himself catch riding at the Red River Equine Vet Services Non-Pro Futurity.

The Griffins raised the mare and Griffin credits Justin Mathison with helping him prepare to show. He’ll be piloting her again at Oklahoma City while Samantha is still on the rehab mode.