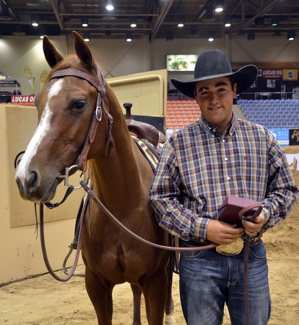 “The herd work was really good. I haven’t showed out of the herd hardly at all, and I was really nervous about it. The reining was okay. She stops really hard – I just have to make sure to run her to the stops. The cow work was really exciting. I wanted to go as fast as I possibly could, and I had to do a lot of kicking, but it turned out good,” Probert said.

Probert, originally from the small Eastern Oregon town of Vale, started working for Wright almost two years ago. He started Mama Mia Lotta Lena as a 2-year-old and has ridden her ever since.

“She was going to be an open horse, but just wasn’t quite going to make it. Lori and Sharon gave me the opportunity to show her. I was super excited. She has a lot of natural ability,” he said.

When asked what he likes about reined cow horse, Probert immediately replied with a smile, “Everything! I love it all. I’ve been starting colts my whole life. I just love training horses.”

He thanked Justin and Sharon Wright, Lori Lucchetti, Eric Frietas and his parents for their support and encouragement.