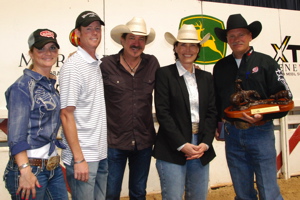 Phil Hanson (right) was presented with the Derby Gelding Open award by NCHA President Barbara Brooks and her husband, country music performer Kix Brooks. Smooth Strategy’s owners, Havey and Kyle Manion (left) were there to join in.A couple hours after securing a spot in the Derby Non-Pro semifinals with his owner, Smooth Strategy marked a career-best 224 and carried trainer Phil Hanson to a victory in July 31’s National Cutting Horse Association (NCHA) Summer Spectacular Derby Gelding Open finals.
The horse (Smooth As A Cat x Diva In Denim x Smart Little Lena), owned by Kyle Manion, Aubrey, Texas, and bred by Kyle’s father, Tommy Manion, picked up his first limited-age victory and earned $4,979 with Hanson. The win pushed his Equi-Stat earnings to more than $43,000.
Smooth Strategy has a shot at adding quite a bit to that before the week is through. He qualified to compete with Manion in the Derby Non-Pro semifinals and Derby Gelding Non-Pro finals. He will also compete again with his Weatherford, Texas-based trainer, Hanson, in the Derby Open semifinals on Aug. 2.
“The times we’ve shown him a lot, it’s almost like he’s gotten a little bit stronger,” Manion said. “I just showed him a little while ago [late in the last set of Wednesday’s Derby Non-Pro second round], and got in some tough situations. For Phil and the horse to come back and win with one bunch in between, that’s pretty exciting.”
Manion and Smooth Strategy marked a second-go 214.5 late Wednesday afternoon. That score, paired with their first-set 218, earned them a place in the Non-Pro semifinals. Smooth Strategy and Hanson qualified for Aug. 2’s Open semifinals last week with a 218/216-434 start.
Desire A Lil Pepto (Sweet Lil Pepto x Playguns Desire x Playgun), and Lee Francois, Murchison, Texas, finished as Reserve Champions in the Derby Gelding Open with a 220.5 to earn $4,752. Desire A Lil Pepto, owned by Reagan Lancaster, Plano, Texas, and his trainer Francois will compete again in the Derby Open semifinals.

Subscribe to Quarter Horse News for full coverage on the NCHA Summer Spectacular and other major events.