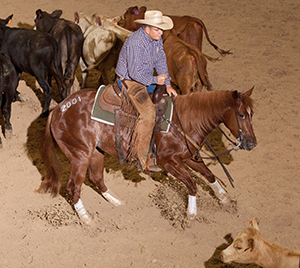 Highest-seller MK Lollie Pop • Photo by Jim ArnoldThe National Cutting Horse Association (NCHA) Summer Spectacular Sales took place in Fort Worth, Texas, on Aug. 2-3, with three strong sales offering yearlings, a production sale and mixed stock. A total of 184 horses went through the ring, with 155 selling (84 percent) for a net average of $10,205. That’s an increase of 15 percent over last year’s net average, which is a good sign for the market heading into the fall sale season.

The highest-selling yearling was Rios Cat, a sorrel stallion consigned by Waco Bend Ranch. Derrick Miller purchased the colt for $57,000.

The last yearling through the ring in the first sale was the second-highest seller of the evening, when The Cat Crept In brought a final bid of $50,000. Donna Sue Henry purchased the High Brow Cat colt from consignor Reata Cutting Horses.

The Cat Crept In is the second foal out of the Freckles Playboy mare Ms Mimosa. She is an NCHA World Champion Mare and Silver Award earner with $177,000 to her credit. Her first foal, Champagne Of Cats, tied for fifth at the San Antonio Livestock Show Open Cutting and is currently competing as a 3-year-old in 2013.

The Summer Select Yearling Sale was extremely popular, selling 14 of the top 20 highest sellers overall. Foals of 2012 from all sales sold better, with fewer buybacks, than the sale as a whole, albeit for a slightly lower average of $9,528.

The second day of sales started with Gene and Judy McKown’s MK Cutting Horse Production Sale. The 15-horse consignment from the Norman, Okla., ranch was small but mighty, averaging $21,169, well above the overall average. A trio of 3-year-old mares topped the sale, including overall highest-seller MK Lollie Pop.

As the first horse in the ring on Aug. 3., MK Lollie Pop garnered a final bid of $60,000 from Tim Griessel. Two horses later, MK Rey Girl sold for $44,000 to Bobby Gale, followed another two horses later by MK Katabatic, who sold for $50,000 to Catherine Adams.

In training with consignor Wes Galyean, Metallic Jones sold to Kelsey Weeks. The Metallic Cat gelding is a half-brother to Catlight, an earner of $163,978, and He Be Fierce, an earner of $52,848 in reining and reined cow horse events. Metallic Jones’ yearling full brother brought $9,500 in the Yearling Select Sale.

Reeds Instant Magic, who sold with a filly at her side by Cats Greystone and in foal to Kit Kat Sugar, checked in as the sale’s top broodmare. A Breeder’s Invitational Classic Non-Pro Champion during her cutting career, Reeds Instant Magic is a full sister to three other money-earners, including NCHA Futurity Non-Pro finalist Mr Ed Hardy. Reeds Instant Magic’s 2012 filly sold for $35,000 in the Yearling Select Sale, making her the seventh-highest seller overall.