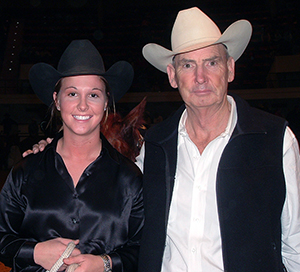 A member of the National Cutting Horse Association (NCHA) Open Riders’ Hall Of Fame, Earnheart earned $1,940,955 during a career that started in the early 1970s. He also worked many years with partners producing several major limited-age events, including the Memphis and Tunica futurities and the Cotton Stakes Derby and Classic.

Early in life, Earnheart farmed row crops alongside his father, who grew cotton, raised cattle and was responsible for sparking his son’s interest in cutting. At age 20, Earnheart started working with cutting horses and went on to become one of sport’s leading riders and trainers. He trained and rode Dual Pep (Peppy Sand Badger x Miss Dual Doc x Doc’s Remedy) early in the legendary cutting stallion’s career, and they won four Open titles and placed near the top several times throughout the 1989 and 1990 seasons.

James Hooper, Decatur, Ala., has known Earnheart since his early days as a cutter. Since the mid 1990s, they had worked together, along with Don Bussey, Guin, Ala., in producing the Memphis Futurity and Tunica Futurity. They became closer friends in 1995, when Earnheart sold Commanders Legacy to Hooper.

Commanders Legacy (Genuine Legacy x Debra Dun It x Dun Commander) was bred and originally owned by Pat and Teresa Earnheart. The mare tied for fourth in the 1995 NCHA Futurity Open with Earnheart, and made the Non-Pro finals at the same show with Hooper.

“Pat was a horseman, and he knew how to raise young horses,” Hooper said. “All he ever did was train and show horses. I don’t think he ever did anything else.”

Many people appreciated Earnheart’s direct and at times blunt way of sharing opinions on horse issues, Hooper added. “He was plain speaking. If you didn’t want to know what he thought, you didn’t ask him.”

Earnheart had not competed in cutting since undergoing lung transplant surgery in October 2009. Summerdale, Ala., trainer Austin Shepard had lined up a horse for Earnheart to compete with at the 2012 NCHA Futurity, but Earnheart’s health did not allow him to ride. Despite struggling with breathing issues, Earnheart continued to help produce aged events alongside longtime friends.

“I used to ride horses all day, every day. Then one morning, I couldn’t,” Earnheart said during an interview at the 2011 Tunica Futurity. Continuing to help coordinate cutting horse events helped him deal with no longer being able to compete as a cutter, he said. “When I’m here at the show, I’m around all my friends. It keeps me going.”

Pat’s daughter, Kelle Earnheart, Weatherford, Texas, is a member of the NCHA Non-Pro Rider’s Hall Of Fame. At 28, she has already earned more than $1.3 million as a cutting rider. Survivors also include Earnheart’s wife, Teresa, and a daughter from a prior marriage, Laurie.

See More of the Bar VH