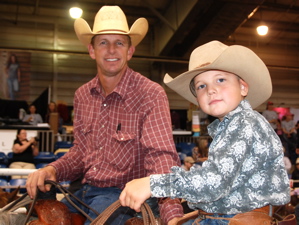 Garys Stray Cat and Casey Carson parlayed a win at a small show last weekend into a championship at the Breeder’s Invitational (BI) in Tulsa, Okla., on Tuesday. After a win in Ada, Okla., Carson told the horse’s owner and his boss, Dan Churchill, Moline, Ill, the horse might have a chance at a respectable showing at the BI.

Carson, 41, has been the resident trainer at Churchill’s Circle C Ranch in Wayne, Okla., for eight years. Bred by Clay McCullar, Baird, Texas, and bought early on by her namesake, Gary Benton, Arkansas City, Kan., Garys Stray Cat ended up in Carson’s hands when Churchill bought her in August of her 2-year-old season. The now 4-year-old mare was being pointed for the NCHA Futurity when she injured a hind leg about one month before the big event.

“We just started her back about a month ago,” Carson said. “I had a good feeling about her,” he added.

The Breeders Invitational continues through Saturday.