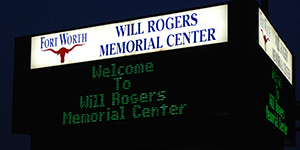 How much funding Texas horse shows receive in the near future depends on the final wording of two bills pending in the state’s ongoing legislative session.

Since 2003, money from state-supported Major Events Trust Fund (METF) and Events Trust Fund (ETF) programs have helped Fort Worth and other Texas cities attract and retain horse events. Now, state monies for some of those shows could be in question.

Texas Senate Bill 1679, if approved, could have the most impact. It could prevent many horse events from even applying for state money. That’s because in part, the bill could require proving they will increase tax receipts by at least $375,000. A proposed change in ETF funding would allow Texas cities to designate one event per year to receive an exemption, but require all others to meet the new $375,000 tax threshold.

Billy Smith, executive director of the Fort Worth-based American Paint Horse Association (APHA), said it received about $200,000 in both 2011 and 2012 to help with expenses from its two annual shows. Proposed new legislation could end that, he said.

“One of the significant reasons that we stay in Fort Worth is because of that money,” Smith said.

“What I see proposed right now could have a fairly negative impact. Very few shows at Will Rogers [Memorial Center] are going to rise to the level where they can receive funding.”

Another portion of proposed legislation would require state audits to determine whether entities receiving state funding comply with their agreement. That requirement, as originally worded, could prove troublesome for all three National Cutting Horse Association (NCHA) “Triple Crown” limited-age cuttings that take place in Fort Worth.

All three annual NCHA limited-age events still meet proposed new economic impact standards. They also would not count against the proposed ETF $375,000 cap, since they are funded through the METF program. The NCHA’s funding could be delayed, though, due to incomplete prior-year state audits, unless wording in the proposed bill changes.

Fort Worth’s Will Rogers Memorial Center (WRMC) also hosts many other equine events, including APHA World and Junior Youth World shows. Earlier this year, the APHA and the Appaloosa Horse Club (ApHC) announced they would overlap their Youth World Shows in Fort Worth, creating a cooperative effort between the two major breed organizations. The announcement came on the heels of a new five-year contract between the ApHC and the City of Fort Worth to host the National Appaloosa Show & World Championship Appaloosa Youth Show, previously held in Tulsa, Okla. The City’s new $32-million Equestrian Multi-Purpose Building at WRMC bolstered its bid.

State funding rules are subject to change each time the Texas Legislature meets, every two years. At this point, it’s impossible to know exactly what changes will take place between now and the end of the current legislative on May 27. Once it ends, Texas Gov. Rick Perry can sign or veto any bill approved during the session through June 16.

“We applied for funding for the NCHA events, for the Paint horse events, and for the Appaloosa event. We’ve got quite a few shows that we apply for funding. And we intend to keep doing that,” City of Fort Worth Public Events Director Kirk Slaughter said.

After visiting with officials at the Texas State Comptrollers Office in Austin last week, Slaughter said he remains “cautiously optimistic” state legislators will not prevent Fort Worth or other Texas cities from keeping and attracting horse shows.

“Our folks are working diligently to pursue other language,” Slaughter said. “We are right in the middle of it, I assure you. I think we’ll be OK. At least at this point, I’m feeling pretty comfortable.”

The METF funds have helped Texas cities retain and attract activities ranging from horse events and conventions to auto races and the National Football League’s 2011 Super Bowl in Arlington, Texas. Texas cities apply for and receive money from the state for approved events. It later reimburses co-applicants, who bring events and extra tax revenues to the city.

The ETF funds have offered money to help cover costs of somewhat smaller, but still economically significant, events moving to or remaining in Texas cities. The Reichert Celebration Of Champions pleasure horse event, Arabian horse shows and national team sorting events have moved to Fort Worth in recent years, partly due to EFT help with expenses. Annual NCHA and APHA shows have remained in Fort Worth, instead of accepting bids to move elsewhere, partly because of the same programs, Slaughter said.

For continuing coverage of this and other legislative efforts that affect the horse industry, read Quarter Horse News.