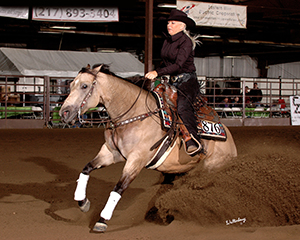 NRBC Non-Pro leaders Surprizentheprincess and Kelle Smith, shown winning the Gordyville Breeders Derby Non-Pro. Photo by WaltenberryThe National Reining Breeders Classic Non-Pro preliminaries concluded Tuesday, April 16, at the Great Southwest Equestrian Center in Katy, Texas. Coming in as the third-to-last draw, Kelle Smith and Surprizentheprincess took the lead of the round with a 222.5, besting the other 174 entries.

Smith and Surprizentheprincess, a 4-year-old mare by Jerry Lees Surprise out of Princess In Diamonds, earned $7,959 for the Non Pro preliminary win.