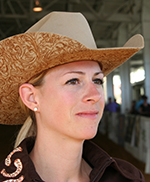 Full results of the FRHA Florida Classic Derby can be found in the print edition of Quarter Horse News.